The foundation for this work is an iron sculpture known as “The Salish Sea”. This is located in Oak Bay, Victoria, British Columbia, Canada. The Various Meanings Symbolized in the Sculpture

The  image on the sculpture and giclee depicts the Thunderbird on the back of the Orca. This is the traditional Salish image of a cry for help.

HELP for the plight of life in the Salish Sea.

HELP that never came for the residence school children.  Residential schools were UK-Canadian government-sponsored religious schools established to assimilate Indigenous children into Euro-Canadian culture. Since the last residential school closed in 1996, former students have pressed for recognition and restitution, resulting in the Indian Residential Schools Settlement Agreement in 2007 and a formal public apology by Prime MinisterStephen Harper in 2008. In total, an estimated 150,000 First Nation, Inuit, and Métis children attended residential schools.

HELP in 2017 to put a spotlight on  1,017 women and girls identified as Indigenous that were murdered between 1980 and 2012—a homicide rate roughly 4.5 times higher than that of all other women in Canada.

Life is a Cosmic Phenomenon

In 2015, Chris Paul agreed with the Cattle Point Foundation that it would be acceptable to also imagine the sculpture as symbolic of life arriving on Earth from an approaching COMET.  As such it was chosen to symbolize the Panspemia Hypothesis – that Life is a Cosmic Phenomenon.

Two giclees were commissioned to be presented to 2 universities :

The work donated to Cambridge is a giclee of this image. In fact it is the “artists proof  – 1/1” signed inside at the back “Chris Paul – Life is a Cosmic Phenomenon “. This gift  was made to Churchill College, Cambridge  by Cattle Point Foundation.

The gift was called “The Salish Sea / Life is a Cosmic Phenomenon” by Coastal Salish Artist Chris Paul.

It was dedicated on July 1st, 2015 to the visionary collaboration of  two great Commonwealth scientists :

Sir Fred Hoyle (on this, his 100th Centenary) and

The inauguration was held in Cambridge, UK on Canada Day, July 1, 2015. Dr. Herle comments : “It is inspiring to see Chris Paul ‘s “Salish Sea” alongside Churchill College’s rich collection of artworks and to see Professor Wickramasinghe’s work honored in this way!”

Chris Paul, Salish Artist. who generously made available his “artists proof 1/1” of the Salish Sea and signed it “Life is a Cosmic Phenomenon”

The Eisenhower Fellowships Association of Sri Lanka and the University of Peradeniya, Kandy, Sri Lanka

Giclee #2/20 was presented to the Physics Department of the University of Peradeniya in Sri Lanka, in August 2015.

This was symbolically presented to the University at the same time that 1/1 Artists Proof was donated to Churchill College, on July 1st, 2015. It was an identical dedication : to the visionary collaboration of  two great Commonwealth scientists who had also spent time in Sri Lanka  :

Sir Fred Hoyle (on this, his 100th Centenary) and

Professor Chandra Wickramasinghe (2015/16 Visiting By-Fellow of Churchill College) and a Professor of Astrobiology at the University of Peradeniya. 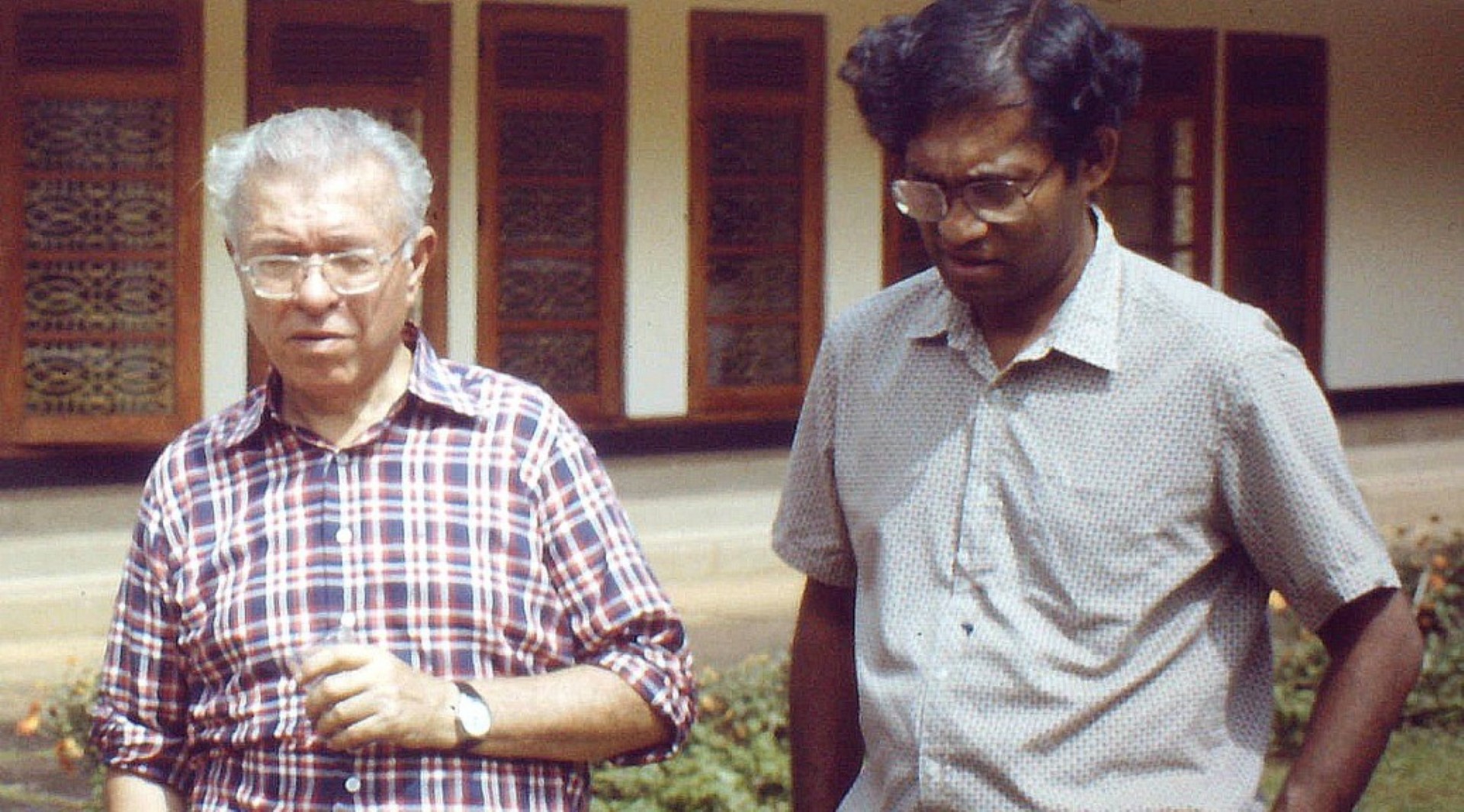 Fred Hoyle and Chandra Wickramasinghe at the University of Peradeniya